End of May Update

Here I sit typing this post, one year older then I was a week and a half ago. I do feel older, but I certainly don’t feel any wiser. (Isn’t this supposed to happen when you get older?) I have noticed the strong urge to yell at the kids to get off my lawn! 😀 My tool set from my giveaway is on its way to its new home, hopefully carrying with it the part of my heart and passion for woodworking that I put into it when I was using it. I spent quite a bit of time a couple weekends ago making sure each part and piece of it was ready to use immediately by the recipient when he receives it. Congrats! I also wanted to give a very personal thank you to each of you that spread the word about the giveaway. Because of you, I set a record for visits to my site! A very big thank you to the guys at Wood Talk Online for the mention on their weekly show, so Thanks Marc, Shannon and Matt!!

Also as part of my 40th birthday, my lovely wife allowed me to spend a week of vacation time during the last week of April first part of May, at my all-time favorite place, the Port Townsend School of Woodworking. I took a fairly new class titled “Hand Tool Joinery Essentials”. As with all my posts about the classes at the school, there is just too much information to pack into one blog post, you just need to check them out! You will not be disappointed, I promise. Suffice to say it was a great time. Mostly stuff I already know how to do, but I did learn some new things. The class was taught by Jim Tolpin and Able Dances, who are both not just good instructors, but were great just to converse with. It was also the debut class for a new shop assistant, Cedar Knoll. He is a former graduate of the schools 12 week intensive and was quite knowledgeable. He was great to talk with and by the end of the week you could hear the echoes of some of the guys calling out, “Cedar do you have a second, Cedar can you help me with this, Cedar what should I do next, etc.” It was really great to watch that dynamic evolve. I think he is a couple of the pictures here. The other students in the class were awesome and the group synergy was really fun. Of course I was in the “fun corner!” Plus I just really enjoy being there and I hope it showed! It is my home away from home away from home (long story!) This was a vacation for me, an opportunity to do some hand-tool only woodworking without worrying about deadlines for clients, products for upcoming shows, the tedium of my regular day job, none of that. It was a chance for me to unwind and concentrate on the skills themselves. Improving how I can incorporate my hand tools into how I normally work. I didn’t have to wear hearing protection once!

The school has a great array of hand tools already, so you don’t need to worry about bring tools if you are coming from a distance. Each bench is fully equipped with everything you would need to complete any course (plus they are already sharpened and ready to go for each class!) Having said that, you are welcomed to bring your own tools so you can work with them during the class. Each tool is different and reacts differently to different people. I feel it is important to practice with what you are going to work with day in and day out, so I decided that I would bring my own tool set with me. Which quickly lead me to the fact that I didn’t have a good way to transport them (I drove back and forth from my house to the school a few days to save on cost, about an hour each way). Plus I’ve wanted to build a portable tool chest for a while and this gave me the perfect opportunity to see it through. First off, I didn’t want to spend a lot of money. Luckily I had a bunch of Sapele plywood pieces left over from a custom library I had built for a client. Plywood is probably not considered acceptable for fine woodworking, but since this is a shop item and I am testing a design, I didn’t really care. Originally I was going to build it like a traditional Dutch tool chest, with an angled top, but after getting the rough case together to mark for the angles, my wife suggested that I keep it square as she had an idea she wanted to try.

Here are photos of the completed chest along with some photos about how much it holds. You can also see her neat idea, which worked perfectly! I also ended up making a saw bench to put the chest on. It ended up putting it at a very comfortable height to work out of. Also since the chest was not wide enough to put my panel saws in, I made a shelf on the saw bench big enough to store them and some other assorted items. The only down side to the chest is it is HEAVY. I could move it short distances by myself without spilling my guts, but only barely. Fortunately I had to foresight to add skids to the bottom by guesstimate on what was pleasing to my eye, which ended up being perfectly spaced for a hand truck I have. It helped immensely with the moving around. I tell everyone it was planned that way, but now you know better. 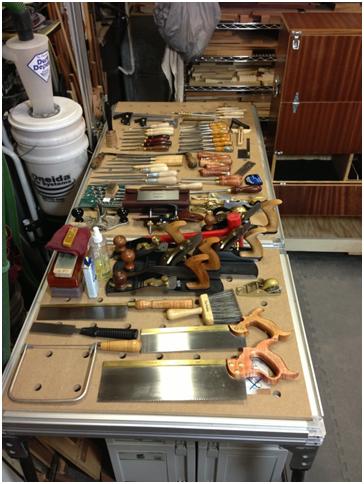 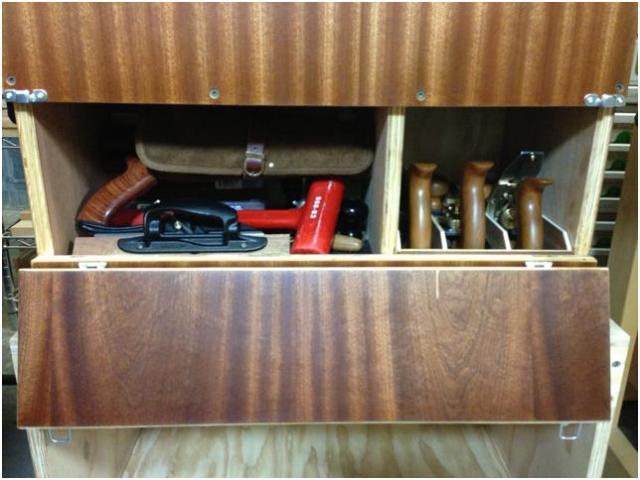 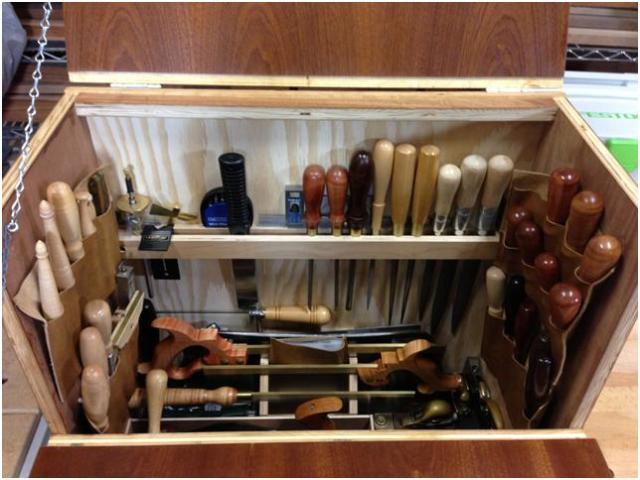 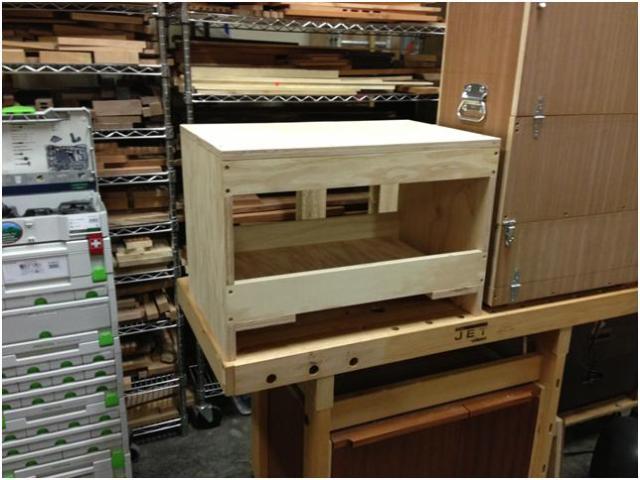 Overall I was very pleased with working out of the chest in the class. It was only a couple of steps from the workbench, everything was easy to get to and I could see at a glance what was missing or where something was that I needed. At the end of the day it was easy to clean up and put everything away in an organized manner, which if you know me, is a must. Another benefit was that I had to pare down on the tools I could take. Since I have OCD tendencies, I wanted to bring them all. But a smaller chest forced me to only take what I needed as opposed to wanted, which was a very big step for me. Not enough where I am going to start selling off my Lie-Nielsen tool collection, but a big step none the less….

Well on second thought, I did end up buying some new and new to me tools after the class, so maybe not so much!

This entry was posted in port townsend school of woodworking, The Butler Did It. Bookmark the permalink.